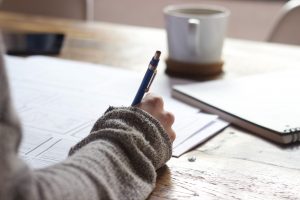 I recently wrote a letter to one of my nieces who was scared of going for something she really wanted because she thought she may fail.

Here’s part of that letter…

I have a few things to say about failure.

Did you know that Venture Capital Investors, known as VC’s, plan on losing 9 out of 10 of their investments? For every 10 promising companies that they invest in, they assume they’ll lose 100% of their money in 9 of them. Their hope is that the 10th one will be a big enough win that it’ll make up for their 9 loses, plus give them a handsome pay day.

Most highly successful people follow this same strategy when it comes to doing life. They fail often and they fail fast because they know that the faster they fail, get back up, course correct, and go at it again… the faster they’ll succeed.

I encourage you to embrace failure. The more you put yourself out there and go for your goals/desires/dreams, the more comfortable it will start to feel. After awhile it’ll be a habit. It’ll be a part of how you do life.

You’ll have a goal or desire, you’ll go for it, and it’ll work out or it won’t.

If it doesn’t, you can learn from it and then course correct accordingly.

And here’s the best part…

You’re most valuable lessons, some of your best stories, and your most defining moments – won’t come from your successes, they’ll come from your failures.

And often times it’s your failures that bring you the best surprises.

Several years ago I sold this big marketing package to a new client and once I started fulfilling on the contract (trying to create and deliver what I sold), I realized I was in WAY over my head.

Earlier that year I had met a really smart guy at a marketing conference and we had stayed in touch on Facebook (we lived across the country from each other). As I was thinking about how I was going to get myself out the mess I was in, I kept having this feeling that I should call him and ask his advice on how I could fix this mess.

It felt weird making the call given the fact that I barely knew him. I swallowed my pride and made the call anyway.

He said he is really happy I called because he had the staff and resources I needed and it was a slow month for him so he was happy to contract out part of his team to me which would give me what I needed, for a budget I could afford, and give him some extra income during a slow month.

I immediately flew across the country to work with him and his team. Within a week I was able to deliver the marketing package I sold. And the new client of mine was so happy that they hired me to do more marketing for them for three more years after that.

My advice to you is… start failing more. Fail often and fail fast.

A bit of “failure” inspiration for you…

A 15-year old named, Jack Andraka had an idea to create a diagnostic test for Pancreatic Cancer that was better than the tests developed by scientists, research labs, and billion dollar pharmaceutical companies.

Jack wrote a proposal to develop a better test. 199 labs REJECTED him. The 200th research lab — at Johns Hopkins University in Baltimore — accepted him. At the lab Jack developed a Pancreatic Cancer test 100 times better and 26,000 times less expensive than the current test. Jack’s invention now saves tens of thousands of lives.

Michael Jordon, who’s considered one of the greatest basketball players of all time, was cut from his high school varsity basketball team his sophomore year. He’s gone on record saying…

“I have missed more than 9,000 shots in my career. I have lost almost 300 games. On 26 occasions I have been entrusted to take the game winning shot, and I missed. I have failed over and over and over again in my life. And that is why I succeed.”

Steve Jobs was fired from the company he founded – Apple. He also failed with NeXT Computer company, as well as, The Lisa Computer. When Jobs returned to Apple, he led the business to become the most profitable company EVER in the US.

Steven Spielberg was rejected both times he applied to attend film school at University of Southern California (USC). As we all know, that didn’t stop him. Spielberg has grossed $8.5 billion from films he directed.

And after he became famous, USC awarded him an honorary degree.

Charles Schultz’s drawings were rejected by his high school yearbook. Schultz went on to create Peanuts (featuring Snoopy and Charlie Brown). Today the cartoon and licensing/product revenue from Peanuts generates over $1 billion a year.

His high school eventually put a statue of snoopy in the main office.

It took 5 years and 5,126 failed prototypes for James Dyson to develop the world’s first bagless vacuum cleaner. A decade later, Dyson setup his own manufacturing facility because he couldn’t find ANY manufacturers that would produce his vacuum. Now he has the best selling vacuum in the world and his net worth is estimated to be over 3 Billion.

When J.K. Rowling wrote the first Harry Potter book, she was divorced, bankrupt and on welfare.

After a dozen publishers rejected her manuscript one finally agreed to publish it. But the publisher told Rowling that she needed to get a job because there’s no money in children’s books.

When you’re not afraid of failure, the world is your oyster.

Stay the course. I love you.